On with the show. 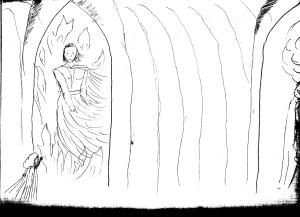 He stands at the feet of his spiritual ancestors.

An unnamed Jedi stands at the feet of his ancestors in spirit. The person in the stained-glass window is Erin Kenobi (the first Erin Kenobi,) a former outlander Jedi who joined the Jedi Order when it was first formed and fought in the first war against the Sith, before the Republic was even created. She could be considered either Obi-Wan’s spiritual ancestor or his great-aunt, a thousand generations removed. Take your pick.

And… is that Obi-Wan in the corner, dwarfed by the image? I don’t know. It COULD be. 😉 I apologize for the comparatively poor quality… I didn’t take as much time over this sketch as I usually do.

Erin Kenobi is one of my characters (as well as being my username). There are actually two Jedi named Erin Kenobi– the second lived post-Return of the Jedi and was a grandniece of Obi-Wan Kenobi. She’s the character I most often act as. Thanks for checking in, and God Bless!