Once again, I have been nominated for a Liebster award, this time by Proverbs31teen, over at The World of the Writer. (See, I finally did it! For the fourth time in the history of this blog, actually!) You can read about the previous Liebster nominations here and here. 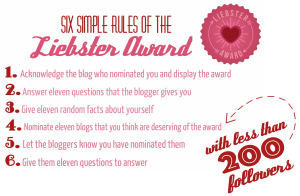 And now, to answer the questions…

Now, for the eleven facts…

Well, that’s all for this Award acceptance. Seeing as it’s the middle of Camp Nanowrimo, and I’m behind in my novel, I can’t take the time to nominate anyone (besides, I don’t know who I’d nominate… I can’t think of anyone whom I haven’t already nominated) or come up with any questions, except for one:

What does the fox say?!

Answer in the comments or on your own blogs, I don’t care. But just make sure to link me back to your answers if they’re blogged. ;-P The song is obnoxious, but the question messes with people’s heads. >:-D

54 thoughts on “Liebster Award: Once again…”