Apparently I have a lot of art I’ve completed over a number of weeks and haven’t uploaded, for some reason.

Warning: The following gallery will contain artwork from multiple fandoms… also artwork that may not have a fandom at all. Proceed at your own risk.

A is for… Avengers

Yup, it’s you-know-who. Falling out of something. (SPOILER ALERT: It’s probably not a helicarrier, though.) And yes, I drew him in the Avengers uniform. It may be “less cool”, but it’s easier to draw. (I was going to add in the glass shards before uploading this… but then I got lazy… might eventually add them in. And color too. Eventually.)

And now, for a bunch of different studies and practice pieces… 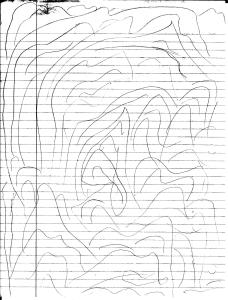 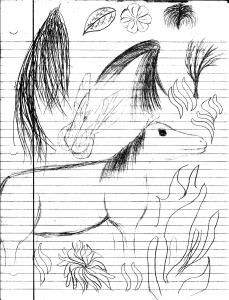 Different attempts at trees and shrubs… 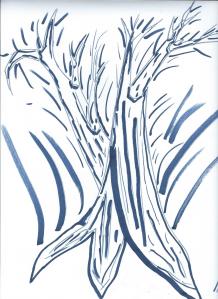 (Cool geeky stuff: This tree on the left could actually be one of the odd ice trees in Sheikah’s epic Let’s All Be Heroes, from Tales from the Northern Realm. Yes, Sheikah, you have fan art! 😀 ) 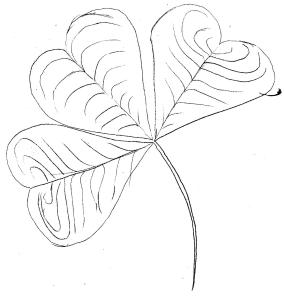 (And a sword. Don’t ask me why.) Medium: Pencil and pen on sketch paper.

At some point, I seem to have had this odd fascination with permanent marker. Next up, we have a shamrock (leaves are fun to draw) and a sword design for a story (it never got used, though the drawing is pretty, in my opinion.

I was bored at Mass. And had a few candles in front of me, from the vigil Mass earlier that day. So, I decided to brush up on drawing wax globs (and polished brass. And figuring out how flames actually look, as opposed to how people portray them.

How to Train Your Dragon 2:

Watching HTTYD 2 for the second time, I was caught up with this urge to draw Valka and Hiccup. Instead, character studies and…

And this is technically more photography-like (though I used the printer’s scanner), but still art. 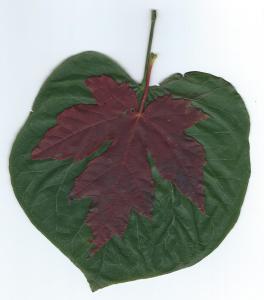 And now, for some Star Wars!

These next few drawings are very old, so be forewarned. They’re all original characters I created at some point.

The one on the left is Erin Kenobi (yup, the same character this account is named for.) She started out as an Old Republic roleplay character. Notice she’s not in Jedi robes–Erin started as a outlander Jedi, not a member of the Order, and wasn’t accepted into the Order until later. In the early days, all Force users who protected their nomadic clans and used the Light Side were called Jedi. It wasn’t until generations after the founding of the Order that only those within it were called Jedi. On the right is Lyddiannah Ortebran, third Grand Master of the Jedi Order, in fancy dress for the reception in which the Coruscanti authorities offer to base the Jedi Order on Coruscant (it was originally in a bid for protection, before the Republic was founded. At least, that’s how it was in the story I worked out.) Note that the fancy dress has nothing to do with Jedi robes–she dressed in Coruscanti fashion (Mirial-inspired, at this point) as a sign of respect, and besides Jedi uniforms back then, though nearly identical to the modern ones, were not yet codified as the attire of the Order.

I think this was supposed to be the original Kenobi or Skywalker family crest. I don’t remember. (It’s rumored that at some point, there was an intermarriage between the two families, as, occasionally, a young woman from either family will have an extra finger on their right hand. For instance, Sharya Kenobi, who had to specially modify her lighsaber’s grip to accommodate it.) Just odd trivia stuff that comes about when I’m worldbuilding, really.

And last but not least, we have a work in progress! 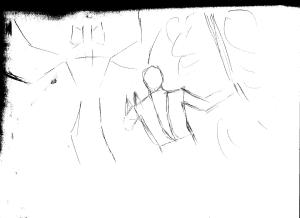 This one is probably the only one in this collection (besides the Captain America one at the top and the HTTYD studies) that is actual fan art, and not really meta-fiction art… it’s complicated. (Basically, metafiction is a genre of fanfiction that’s designed mostly around a certain character and meant to provide tools for other writers or insights into that character, rather than actually telling a story.) It was inspired by something I read in a fanfic once… and then I thought, whoa, this should totally be a mural on the wall of the rebuilt Jedi Temple)… In case you couldn’t tell, it’s Revenge of the Sith, Obi-Wan fighting Grievous. I need to figure out how to maintain the dynamic illusion of motion in a finished product… 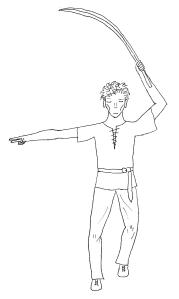 Meet Verun. Wolf shapeshifter and protagonist in the second plot line of the (probably overly complex) Angels’ Reflections saga. (Still working on poses. Cloth is easier to simulate, especially when in motion. Oh, and that sword decided to be difficult–it’s supposed to remain the same thickness until it narrows to a tip, not look like a scimitar. It’s a weapon unique to the shapeshifter underground in Ethreyl.)

So basically, a journey through how my work has improved over the years. Cheers!

Hope you enjoyed this art dump! 🙂 Thanks for reading, and God Bless!