This year, in an attempt to be witty, I decided to rebel for this month’s Camp Nanowrimo. (News flash: it probably wasn’t, my idea has probably been done before, blah blah blah.) What I’m doing: a set of drawings that tell a story. Not exactly one consistent story, it’s more like a… short story collection. In art form.

So anyway, I forged ahead, and I’m determined to give every idea I can a go, even if I have to leave them half-finished, because I know I will eventually (eventually!) come back to them.

(I eventually come back to everything, at some point in my life.)

But mostly I’m blogging to show off my (all but nonexistent) art skills. Also to show my cabin what I’ve been up to. Here goes!

(Okay, so just for reference, first I’ll be posting older work. And then, under the second line, will be my Camp Nanowrimo projects. 😉 )

These next three are parts of a comic I’m working on:

Derp. No way this is working for the comic. Media: pencil on sketch paper. 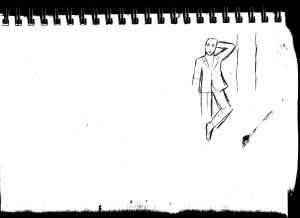 Beginning for the re-drawn page. (Yes, I know my WIPs all look stupid.) Media: Pencil on sketch paper.

Now for the other older drawings… 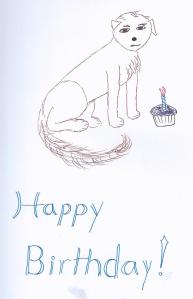 This is something I drew for my boss’s birthday. She absolutely loved it. It’s also in a similar style to my upcoming Doctor Who fan series. (Please do not save/download/use this artwork without my permission. Any of my artwork, but especially this piece, since it was a birthday gift for someone. Thank you.)

And this is my drawing of a character from a short story series I’m working on. He’s… um… it’s hard to explain. Elite warrior with high qualifications for woodcraft and literature, with a background in slaying dragons. Sorta. It’s very much a work in progress.

This is what my WIPs look like. Seriously, it’s horrible.

I have no excuse for this one. Let’s just say I was listening to Owl City and then was inspired by the title of one Doctor Who episode. Also for some reason I drew this with the Tenth Doctor, even though the episode was during the tenure of Christopher Eccleston. Also, because there are photographs of David Tennant wearing an Owl City T-shirt. (My brain is in a constant state of disarray.)

Oh, right. Which episode? The Doctor Dances, of course. 😛

Now we shall move on to the offerings Camp Nanowrimo will bring! 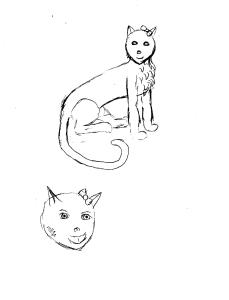 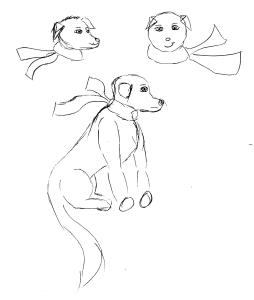 These three are concepts for the Doctor Who fan comic I am working on. Up top, we have cat Tenth Doctor (who is also now my avatar 😉 ). Middle is Rose (I’m working on it…) and bottom, Captain Jack Harkness. I know that Ten normally wears a regular tie, not a bow tie, but how the heck am I supposed to put a regular tie on a cat?! It’s aesthetically impossible! Besides, he wears a bow tie in at least two episodes (and claims that it’s the cause for trouble). It works, I hope. And Jack Harkness is wearing a pilot’s scarf, even though he doesn’t in the show. For the same reason as Ten’s bow tie… how do you fit a pair of suspenders on a dog?! Suppose I could draw him in a trench coat or vest… once or twice… just because… but on a regular basis, nope. (Basically, I’m just drawing them over and over again, tweaking a bit, until I get something I like right now.)

Oh, and for those who might want to check out the adventures of cats Rose and Doctor and dog Jack Harkness, the series will be called Doctor and Compawnions. Doctor&Co for short ;-P It will probably also feature other characters, I just haven’t fixed up their designs so far.

Yes, it’s a crying woman in a fancy dress. Actually, it’s a what-if: What if Padme Amidala did not die during Revenge of the Sith? So basically, now she’s mourning the loss of her husband to the Dark Side. She also might be a prisoner. I’ll get around doing the companion piece, featuring Obi-Wan, eventually. Eventually being the operative word.

And last but not least, my favorite picture (the one I’ve been drawing as part of a collaboration with Sheikah): 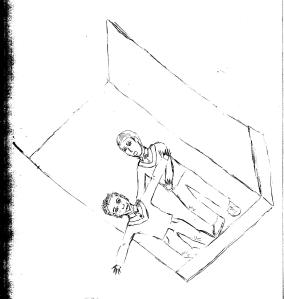 WIP. Pencil on sketch paper. NOT the most recent version I’ve drawn but I haven’t scanned it again yet.

The true origin of nearly 900 years of emnity X-D

I don’t know what that looks like to you, but finished it will be a picture of the Doctor and the Master at nine years old. They’re joyriding in the TARDIS and little Doctor is all like “ADVENTUREEEEEEE!” while little Master is trying to keep him from jumping out of the TARDIS mid-flight. (Also, he’s a little bit space sick.) As is probably quite clear, it was all the Doctor’s idea. And this is also the day when the Master decides that he hates the Doctor. (It wasn’t exactly deliberate that the Master is taller than the Doctor, but I kind of like how it turned out.)

So there you have it. My nano project thus far. Also what I’ve been up to lately.

Thanks for reading and God Bless!

Join 300 other subscribers
Follow The Upstairs Archives on WordPress.com