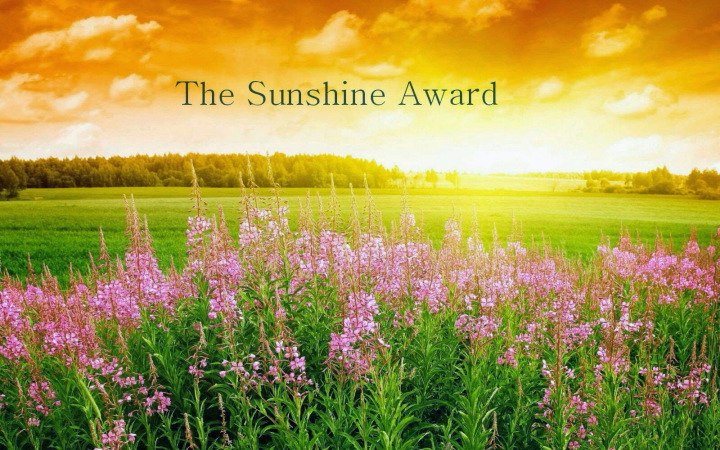 Anyway, Proverbs31teen has awarded me with the Sunshine Blog Award. Which is rather unexpected, ’cause the only award I’ve ever received before was the Liebster. (Four or five times, now. I’ve lost count. :-P) For this one, the rules are rather simple. Five facts about you, answering five questions, setting up five more questions, and nominating five other bloggers. From what I can tell, you don’t have to really nominate people with a certain number or less or more than a certain number of followers for this one, so this should be much easier. *crosses fingers, hoping she didn’t just jinx herself*

First of all, the five facts:

And now, to answer the five questions…

Finally, for my five questions:

And now, I hereby wish to nominate:

Iris, because she’s awesome and encouraging and clever and reckless and everything a best friend forever should be!

Liam, because I couldn’t hit him with any Liebster awards. >:-D (If you were wondering about exactly how many times I’ve received the Liebster award, now, it’s four.)

Rachel Carrerra, because her work is amazing!

Shiekiah, because she deserves it and has written amazing stuff and draws amazing art and I really wanted to say thank-you-for-the-awesome-Bound-to-the-Flame-commissions 😉

Coruscantbookshelf (aka Rosalie), because she got me started blogging in the first place. 🙂

Thanks for reading this post all the way to the end. Thanks for nominating me, Proverbs31teen! Have a great day, everyone, and God Bless!