Okay, so I was thinking about science fiction this morning (trying to decide what the best way to fix my doodle of the Doctor that looked nothing like the Doctor) and I got around to the topic of changelings. 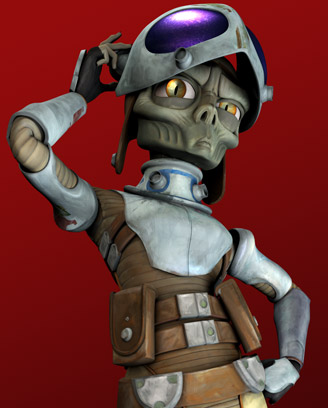 Cato Parasitti is a bounty hunter, a Clawdite from the Star Wars mythos. She appeared in Star Wars: The Clone Wars Season Two. And this is her “real” appearance.

I don’t know about you, but I see a problem here.

If a shapeshifter doesn’t have any problem maintaining a disguise, who’s to say what their true form really is? If all forms feel alike to them, then what’s their “real” form?

On the other hand, some species of shapeshifter appear to be uncomfortable while outside of their “true” form, anything from a sort of out-of-body feeling to discomfort to actual pain. Maintaining their appearance when they’re outside their own forms is difficult for them, and thus they tend to revert whenever they can.

But what about the first type, the ones who have no problem maintaining any appearance and thus don’t actually have a default one?

“True” form is, in their case, probably a cultural thing.

For instance, you might have a society of shape-changers who maintain different forms to denote their status or caste (if they have equivalents.) Shapeshifters who have a certain preferred form, just as humans have favorite brands of clothing. Perhaps you don’t have actual clothing and certain forms are seen as similar to the nudity taboo and you don’t use those in public. Temporary shifts being part of everyday conversations and used to convey ideas and concepts which don’t have the words in English….

There is so much possibility there.

In other news, the fact that we like people like us is not the reason why the viewpoint characters in sci-fi are nearly always human.

It’s also because the viewpoint character HAS to be as clueless and ignorant as the audience, otherwise nothing would ever get explained and we’d miss out on all that awesome theory.

Another important thing about the viewpoint character… he or she must bring something to the table that no one else does. The team members must complement each other, and when the Doctor’s at a loss the companion often saves the day, by being an inventive and unique human being.

(Wow, it’s been so long since my last ramble-y post…)

Join 300 other followers
Follow The Upstairs Archives on WordPress.com